In 2017 a group of people linked to the parish, with the encouragement of the archivist and curator of the Basilica, was interested in recovering the set of bells and manual rings. The initiative was quite successful and now a group of about 20 people, young people and not so young, has been encouraged to sound the bronzes of Pi recovering as much as possible the traditional touches.

In this sense they have an annual calendar of manual touches for both civil and religious festivities. This is how it is normally done, among other feasts at Christmas and Easter, in Santa Eulalia, San José Oriol, Santa María and la Merced, on June 9 (anniversary of the bombardment of Pi during the siege of 1713/14 which caused deaths and the ruin of the church) or on September 11 (in memory of the somaten ringing made with the authentic bells).

Now we have to go a step further, and for this reason the “Associació de campaneres i campaners del Pi” wants to undertake a restoration of the bells in order to recover the traditional manual ringing of the “boga catalana” and lead to the “sitting” of the Pi bells as had been done throughout history.

This would recover in Barcelona an immaterial heritage that has now disappeared but is easily recoverable thanks to the experience of other places that have preserved it, such as Santa María de Cervera, the knowledge of expert researchers in campanology and the large amount of documentation preserved in the Parish Archive of Santa María del Pi which together with that of San Justo are the only parish archives preserved in the city. 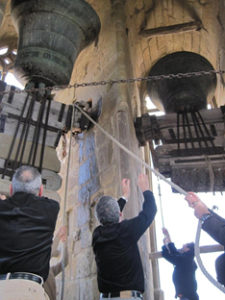 The Association also wishes to encourage scientific studies on the world of bells, their history and the practice of bell ringers, with particular emphasis on the Santa María del Pi bell tower but also extending them to Barcelona and other places in Catalonia, as well as fostering relations with the international bell tower community, which has a long tradition and is currently developing important scientific projects on campanology in coordination with universities and institutes such as the Fraunhofer-Institut in Darmstadt and with projects as prestigious as ECC pro-Bell.

In this sense, the Association is part of the Brotherhood of Bell Ringers of Catalonia, and has established a relationship with the Bell Ringers of Cervera, Tarragona, Valencia, Araau (Switzerland) and Utrecht (Holland) with whom it maintains a very fluid relationship.

It must be said that the Pi bell tower has the support of the Swiss Consulate in a musical project shared with Swiss and Barcelona bell ringers and musicians to interpret music from a very original and pioneering side in Catalonia that has been concretized in October 2018 with some concerts in the Basilica of Pi.