Although older bells are conserved in Barcelona, these are either inoperative or belong to small sound sets without great entity. For this reason, the Santa María del Pi bells are considered the most important ensemble in the city, both for their antiquity and the quantity and quality of their bronzes.

On the other hand it is necessary to bear in mind that, in spite of the fact that the repair of 1991 was not entirely respectful, the bells were kept in their original place in the windows and some original heads and brakes are also conserved to be able to “take them to sit” as it is done in the Catalan form.

These details make it the only set of Barcelona bells in which one could easily recover the traditional Catalan manual vogue and with the original elements and bronzes. 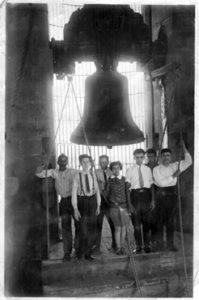 The Zanuy family, the last bell ringers of the Pi and the cathedral, under the “Tomasa” of the cathedral when it was still made to bogar manually to the Catalan. Photograph before 1929. (APSMP, photographic archive)

The Baron of Maldà mentions in his diary the existence of a broken bell, melted at the end of the 15th century and called “el Seny Gros”. According to this chronicler, the bell was used to refound the Andreua in 1804. Except for the Baron’s reference, not much is known about this missing Gothic seny. We know, however, that in the fifteenth and sixteenth century was the bell that rang at the time of the Elevation during the high mass.

It must be said that apart from that, in the opinion of the campanologists who have studied the bell tower and the distribution of its sound, it would be very convenient to replace the Seny Gros in order to add a bass snare sound to the current ensemble, together with a new median that would complete the sound ensemble. Evidently these new bells would be ready to play a Catalan band.

The Baron also mentions in his “Cajón de Sastre” that between 1804 and 1806, coinciding with the beatification festivities of San José Oriol, another bell had been projected to close the complex. We don’t know much because we haven’t found the project yet, in case it was done. We only know what the same chronicler tells us: that the beatification board had in mind to melt it in honour of the new Blessed who had benefited from Santa Maria del Pi. 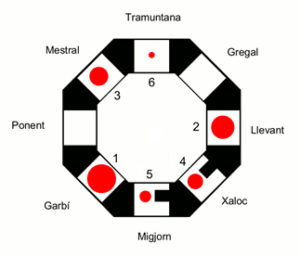