The bell tower of Santa María del Pi is one of the most interesting medieval architectural structures in the city of Barcelona but also one of the most unknown. For many years it has been practically ignored by historiography except for small references of a general nature and always complementary to the study of the church of Pi.

In spite of the absence of an exhaustive academic study, its majestic presence dominating the roofs of the neighbourhood has been evident to many. This presence has often been the reason for popular legends and traditions and a model for artists of all kinds.

In the skyline of Barcelona, since the 16th century, its presence has been constant together with the bell towers of the cathedral as the culminating point of the city and, in this way, it often appears in the representations or views of the city, in which its round and solid structure is very clear, near the wall of the Rambla.

The construction is Gothic, with an octagonal floor plan, 54 metres high and an external diameter of around 12 metres. Divided into five floors, it is crowned with an easily accessible flat roof. All floors have an open circle at the site of the key that serves to transport packages from one floor to another. The access is made by a spiral staircase that starts from the first floor and arrives in a single section to the bell room. In this staircase are the doors that open on each floor. Another smaller section of the staircase and accessible from the window of the bell tower that faces gregal, leads to the roof.

All the construction is made of Montjuïc stone and of very good workmanship, with a great constructive rationalism, orderly and without aesthetic concessions. It has no structural problems of any kind, apart from the superficial wear of the walls. The decoration is very austere and concentrates exclusively on the outside of the bell tower. The windows with pointed arches are open to all the winds of the bell tower and the bells are located in them. The upper part of the tower, touching the roof, has a crown of flaming arches, in a decorative series typical of the early fifteenth century. 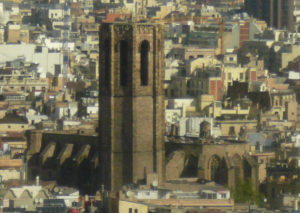 The bell tower above the terraces of Ciutat Vella.

The bell tower, a construction with royal sponsorship

The bell tower of Santa Maria del Pi is a masterpiece of Catalan Gothic architecture. Its constructive particularities and its presence make it exceptional in Barcelona and one of the most interesting bell towers in Catalonia. Both for its architecture and the date of construction, is closely related to the “Miguelete” of the Cathedral of Valencia and Santa Maria de Cervera. Its slender line lords over the roofs of the Pi district offering a privileged viewpoint of the city centre, from where you can see the whole plain of Barcelona and even, on clear days, the Calella Lighthouse, the Montnegre and Corredor mountain ranges, the Marina mountain range, the Montseny, the Grau Mercader del Bertí, the Ordal, as well as a privileged view of the whole Collserola and the Montjuïc mountain.

It was built thanks to the efforts of the parishioners of Pi and the contribution of the kings Peter the Ceremonious and Martin the Human in 1379, extending the construction until the early years of the sixteenth century.

In the same Black Book is preserved the transcription of a document by which King Peter III donates the same 1379 of four thousand Barcelona salaries to the parishioners of the church of Pi to contribute to the construction of the bell tower. This donation was made by his son King Martin in 1400, adding 50 guilders of his own that the latter had promised to give when he was still a prince. (Black Book, fol. 40v., P.110)

Although its architecture has not been further studied in depth, its special features (scale embedded in a wall of 3.5 meters, beginning on the first floor, was the tallest tower of the ancient city, its exempt arrangement, etc . .) have led to think lately that not only was built as a bell tower of the second most important parish of the city, but its proximity to the wall of the Rambla could also have a defensive and watchtower function. In fact, its entire history is full of episodes in which its defensive function has been verified, especially during the numerous sieges suffered by the city of Barcelona in modern times, such as during the Guerra dels Segadors and the War of Succession. 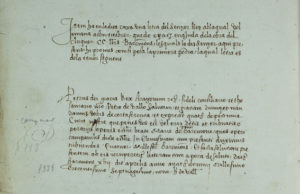 King Peter the Ceremonious undertakes to give four thousand salaries for the construction of the bell tower of Pi. April 17, 1379. (Black Book, folio 40v. (P.110)

The bell tower, because of its height and its isolated position in the center of the city, also became a privileged point to watch the enemy troops who wanted to assault the city. During the sieges of 1697 and especially that of 1713 to 1714, it was fortified and used to warn of the movements of the troops, as well as to call for the defense of the city as happened in the early morning of September 11, 1714, when its bells seconded the desperate somaten of the cathedral just in the final attack of the French and Spanish army. There is also evidence that it was converted into a shelter for the people of the neighborhood, being the only one preserved today of the five shelters that were set up to defend the civilian population during that siege.

The Parish Archive of Santa Maria del Pi provides a lot of information about the protagonism of the bell tower and its bells in these events of 1714. The costs of fortification, the experiences of the refugees, the use as a watchtower. Even the expenses of the rescue of the bells, just when the city fell and that the invading troops had imposed by virtue of the “Right of metal and bell” and that had to be contributed by the parishioners. 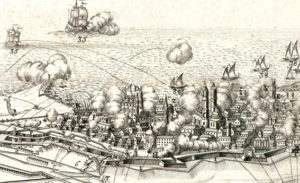 Bombardment of Barcelona in 1714 according to Francisco de Santa Cruz. To the right of the image you can see Santa Maria del Pi and its bell tower marked with the letter Y.

The festive bell tower of Barcelona

It is not well known that on the days of great celebrations in Barcelona, be it by the entrance of His Majesty, of the bishop or perhaps of a relic of an important saint, there was a citizen musical thread that was played from the roof of the bell tower of Santa María del Pi.

The emblematic bell tower, the highest in ancient Barcelona, due to its central and isolated position, still offers a 360-degree view over the roofs of the medieval city. For this reason, the bell tower became the ideal place for a group of trumpets to spread their sound throughout the city while, down the street, festive events took place.

Placing groups of minstrels in high places while celebrating festive and religious events in the street, was quite common in Europe since medieval times. It was the so-called loud music that is played outside, with woodwind or brass instruments and often in high places, as opposed to the low that was played inside.

The bell tower of Santa María del Pi was one of the points used in Barcelona for this type of musical and festive events.

The documentation in the Archive of the Basilica of Santa María del Pi provides numerous references to payments for acts carried out in the bell tower, especially with regard to festive gunpowder: males and harquebuses were fired from the roof of the bell tower on feast days and towards the end of the 18th century even fireworks castles were set in motion, according to the eye-witness testimony of the Baron of Maldà, making the slender tower one of the most traditional festive elements of the city. 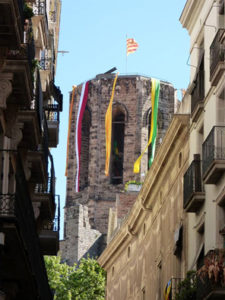 The bell tower impaled for the feast of Sant Jordi.

Lately, the “Associació de campaneres i campaners del Pi” has started a campaign to recover old festive traditions that had as protagonist the tower as “the empaliada” that is made 4 or 5 times a year for the most important festivities such as Christmas, Saint George’s Day, September 11 or the festivities of Saint Joseph Oriol and the Virgin of Mercy.