You are here: Home1 / Mystery of Resellers

The procession that came out of the Pi, organized by the Archconfraternity of the Blood on Holy Thursday, had become the most important in Barcelona and many groups such as the nobility, institutions and guilds participated. Many people also went to see her, and even people came from the surrounding villages, as Joan Amades tells us in his Costumari Catalán. It is for this reason that the procession became one of the most important events in Barcelona’s festive calendar, helping to make our basilica a very popular reference point from the late 18th century and throughout the 19th century.
The participating guilds competed in taking out the most beautiful and artistic processional mysteries, the “pasos”, and therefore, in 1817, the Resellers’ Guild commissioned Damià Campeny, who had just returned from Rome where he had gone to study sculpture, to study a spectacular mystery that immediately became the star of the procession. This was Campeny’s first work in Barcelona, which would become one of the best Catalan sculptors of the first half of the 19th century.
The mystery, the only one in the ancient procession that remains intact, represents just the moment to close the tomb of Jesus. Joseph of Arimathea and Nicodemus can be seen closing the slab that he closes and in the figures of Mary, St. John and Magdalene expressing their sorrow for the death of the son and teacher. The ensemble is a totally neoclassical composition, a style which, at its purest level, was introduced by Campeny precisely with this mystery in mind. It is worth mentioning the parihuela or pedestal that supports it and that was carried in the arms of the bastaixos rented for the occasion. This parihuela is a high quality piece of furniture with an exquisite golden wood carving with noble metal applications.
Now, the National Museum of Art of Catalonia, the owner of the piece, has completely restored it and has kindly agreed to give it to us to exhibit it in a very purposeful context: our basilica. From now on you will be able to contemplate this work, so important for the City, forming part of our museum and thus returning to the place where it was made, and also close to those who commissioned it: the Resellers. It will be placed provisionally in the Dormition Chapel until the room where it will be definitively exhibited in the context of an exhibition on the Blood Procession is ready. 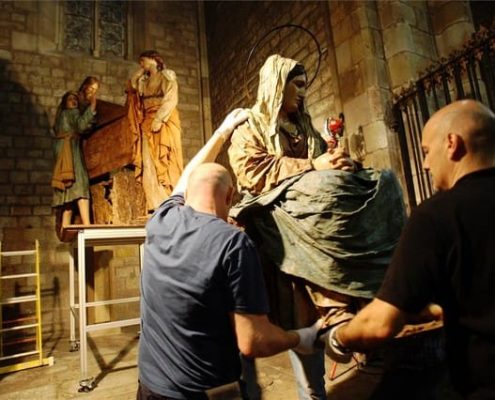 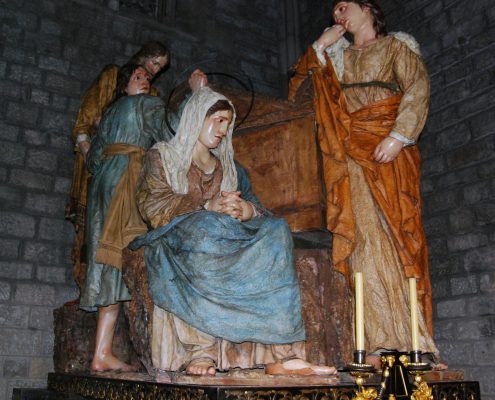 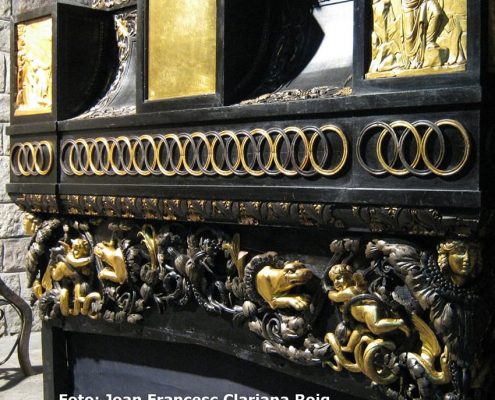